The Chiang Mai University Research Institute for Health Sciences (CMU-RIHES) was established in 1967 and formally constituted in 1978 as part of Chiang Mai University (CMU), a public university chartered by Act of Parliament under the jurisdiction of the Ministry of Education, Royal Thai Government. Its initial research focus was malnutrition, but since 1988, HIV/AIDS has been a major focus. Through a longstanding collaboration with Johns Hopkins University (JHU) and support from the Rockefeller Foundation, the Walter Reed Army Institute of Research, and the U.S. NIH, CMU-RIHES researchers have been able to acquire the training, facilities, and equipment to make it one of NIH’s strongest overseas research sites for prevention and treatment in HIV/AIDS.

2005 NIAID recompetition for CTUs and CRSs

2013 NIAID recompetition/renewal for CTUs and CRSs

In 2013, NIAID announced recompetition/renewal for Clinical Trial Units (CTUs) and ClinicalResearch Sites (CRSs). In this round, CMU-RIHES expanded its CTU by adding the anotherlarge, respected, and prolific institution for HIV research: the Thai Red Cross AIDS ResearchCentre (TRC-ARC), affiliated with Chulalongkorn University. From this CTU expansion, theCMU HIV/AIDS CTU was renamed to “Thailand HIV/AIDS and Infectious Disease ClinicalTrials Unit (THAI CTU)”, led by Co-PIs Suwat Chariyalertsak, Director of CMU-RIHES, andKiat Ruxrungtham, TRC-ARC Deputy Director, and Director of its labs for clinical research andimmunology. THAI CTU, with its three CRSs, successfully competed the recompetition/renewal process and was awarded byDecember 2013 to November 2020.

THAI CTU is one of 37 NIAID-funded CTUs around the world to conduct clinical research onHIV treatment and prevention from December 2013 to November 2020. There are only 11stand-alone CTUs outside the US and only 2 CTUs in Asia.

Our 3 CRSs are among 109 CRSs around the world. There are only 8 CRSs in Asia and only 4CRSs in Thailand.

At CMU-RIHES, there are 2 clinical research sites (CRSs):

Despite of having 2 CRSs and conducting clinical research under 3 Clinical Research Networks, CMU-RIHES consolidates its operations using common core administrative and research supporting teams as shown in the organization chart below. 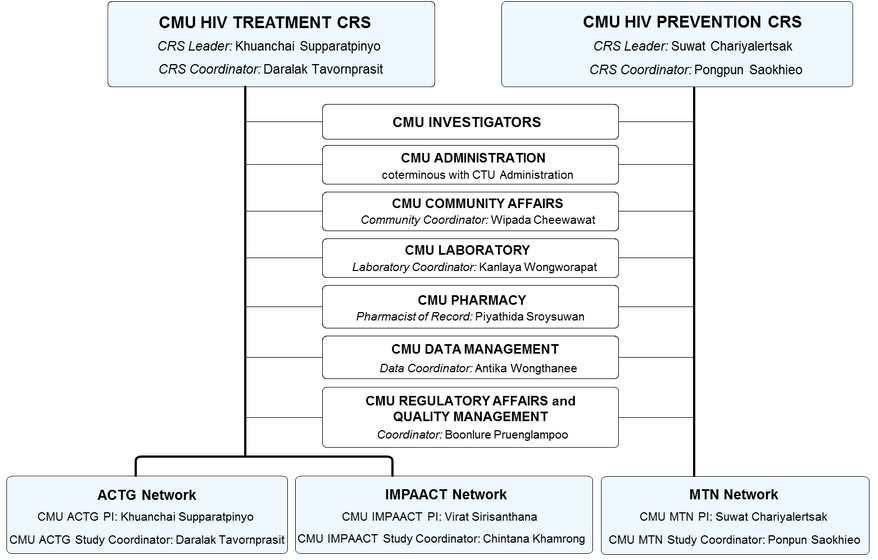